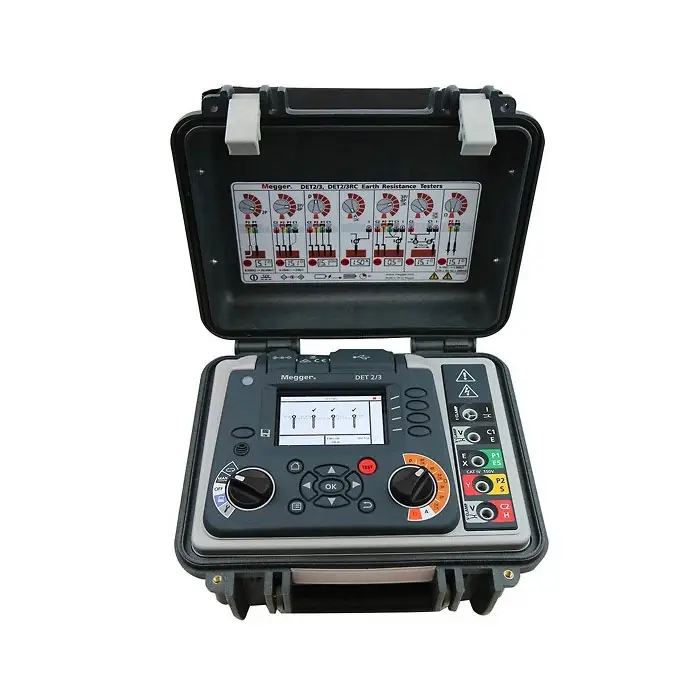 The Megger DET2/3 High Resolution Earth Tester is a sophisticated tester intended for use on large earthing systems where it is important to measure ground electrode resistance and soil resistivity.

The Megger DET2/3 is particularly well suited to performing four-terminal resistance measurements that eliminate the resistance of the current circuit. It is also able to provide highly accurate results for soil resistivity tests, making it particularly useful for determining the optimum electrode design and site, as well as performing archaeological and geological investigations. The Megger DET2/3 Earth Tester also includes the capability to perform continuity tests at 200mA and has a measurement range of 0.01Ω to 1kΩ. Additionally, it can perform leakage current tests and has a measurement range of 0.00A to 2.00A.

The Megger DET2/3 Earth Tester’s test voltage, test frequency and filters can be easily adjusted allowing the user to tailor the instrument to the application, as well as improve its precision by compensating for adverse conditions. Its microprocessor-controlled system also adds to this instrument’s versatility and facilitates its ability to provide excellent error detection.

Measurements and test details are viewable via the Megger DET2/3 Earth Tester’s backlit, colour, 5.25-inch QWVGA display. This instrument is able to supply a live trace of the measurements allowing the user to view the amount of noise present in the system-under-test. This feature is of particular use to expert earth test engineers performing diagnostic tests.

Furthermore, the Megger DET2/3 Earth Tester’s processors and extensive internal memory facilitate its ability to calculate resistivity immediately (using either a Wenner or Schlumberger method). Moreover, its extensive memory ensures that the day's test results can be saved. Measurements may be downloaded from the tester to a USB flash drive, or to a PC with Megger’s PowerDB™ Software installed for further analysis.

To accompany its extensive testing and measurement capabilities, the Megger DET2/3 Earth Tester features a robust, weatherproof design making it suitable for use in rugged, outdoor environments and thereby expanding its scope-for-use. It has an IP rating of 54 with the case lid open and an IP rating of 65 with the lid closed. The Megger DET2/3 Earth Tester’s casing and lid are made of a tough and light copolymer polypropylene, ensuring that they are suitable for challenging outdoor environments.

The Megger DET2/3 Earth Tester is a highly accurate, versatile and robust instrument suitable for performing precise earth electrode grid and soil resistivity tests. It is ideal for a variety of railway, lighting protection and earth/ grounding applications.